The determination of pesticides is challenging for several reasons:

What is a pesticide?

A pesticide is any chemical which is used by man to control pests. The pests can be insects, plant diseases, fungi, weeds, nematodes, snails, slugs, etc. Currently, more than 800 pesticides (active ingredients) are sold worldwide in thousand of different formulations. Pesticides are grouped or classified according to the pests they control, their chemical structure, how/when they work, or their mode of action (site of action). The most useful way to classify pesticides in order to explain their analysis is by their chemical structure. The classic major chemical groups of pesticides are:

i) Organochlorines, which are a group of hydrocarbons with one or more chlorine atoms. Chlordane, dieldrin, and DDT are examples. Most of the members of this group have been outlawed in developed countries and are considered persistent organochlorine pollutants (POPs).

(ii) Organophosphates, including esters of phosphoric, phosphonic, phorothionic, or related acids. Some of the more common examples in this group are: diazinon, dichlorvos, and malathion.

(iii) Carbamates, formed by salts or esters of carbamic acid. Carbaryl and propoxur are examples.

(iv) Pyrethrins, are the most represented pesticides of plant origin. Synthetic pyrethroids, such as D-phenotrin, are similar in action to pyrethrum.

(v) Triazines consist of a number of substituted 1,3,5-triazines, which are classical herbicides.

(vi) Substituted ureas comprise a large number of groups such as phenylureas, sulfonylureas, or benzoylureas, which are mainly herbicides. Some urea derivatives have insecticide activity as well.

(vii) Triazoles are mainly fungicides, such as cyproconazole and myclobutanil.

There are many sources for learning more about specific pesticides or the different classes of pesticides.  Listed below are governmental, academic and non-governmental website links that contain additional information.

What are the problems with pesticides?

Pesticides are intended to deliberately kill living organisms. This can adversely impact the environment, wildlife and human health. Organisms may be affected directly or indirectly as a result of pesticide use:

Many experts believe that the indirect effects on the environment may actually be more significant than the pesticides’ direct effects. Furthermore, some of the direct effects on human health have become of less concern as a result of tighter legislation in developed countries.
Pesticide impacts include: 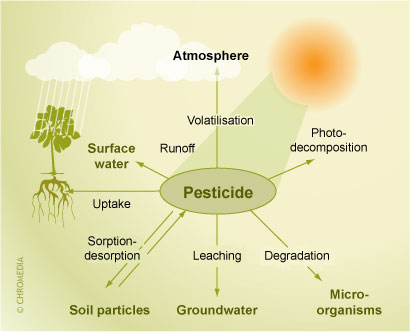 Sources of the effects of pesticides

Some recommended sources of information on the effects of pesticides in environmental and human health are:

For many of these compounds, legal action levels (e.g. maximum residue levels, MRLs, or tolerances) in food and water have been established. Other environmental compartments are not regulated. MRLs are defined as the maximum concentration of pesticide residue (expressed as milligrams of residue per kilogram of food/animal feedstuff) likely to occur in or on food and feedstuffs after the pesticide is used according to Good Agricultural Practice (GAP), i.e. when the pesticide has been applied in line with the product label recommendations and in keeping with local environmental and other conditions. Pesticide residues have been regulated by various legislative authorities throughout the world, all of which are concerned with the quality, efficacy, and safety of these compounds as they are used. However, there is no harmonized global legislation.

Table 2 illustrates some MRLs or tolerances established by EU, USA, and Codex Alimentarius Commission. In general, the MRLs are in the range of 0.01-10 mg/kg depending on the combination of commodity and pesticide.  The lower MRL’s are generally for banned compounds and are a function of the minimum limit of detection (LOD). 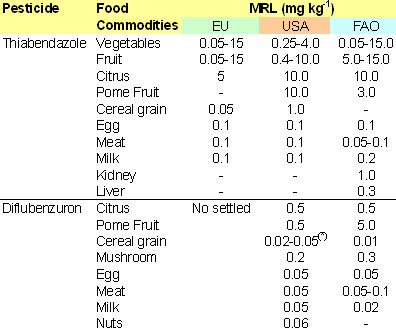 According to the European Union directives, individual pesticides in drinking water must be detected at the ≤ 0.1 μg/L level.
The following web pages give an idea of the similarities and differences in the MRLs or tolerances in food:
Codex commission
http://www.fao.org/ag/agp/agpp/Pesticid/JMPR/PM_JMPR.htm
http://www.codexalimentarius.net/mrls/pestdes/jsp/pest_q-e.jsp