Inside the UV/Vis spectrophotometer

A quick intro to the 'light' sources in a UV-Vis spectrometer:

The tungsten lamp (or other materials like NickelChrome or carbon) where an electric current is going through the filament causing the wire to heat up and glow.

Spectral distribution of a black body at different temperatures 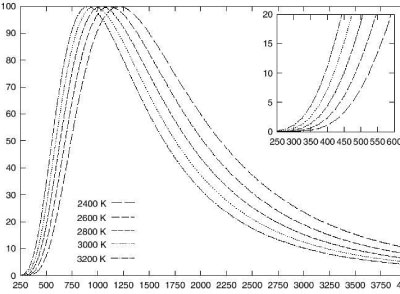 2. Gas discharge lamps.
When the lamp is turned on an electric discharge takes place and a current starts to flow through the vapor in the lamp; this causes the gas to heat up and it turns into a plasma (atoms lose a electron and the vapor becomes ionized). The plasma conducts the electric current, heats up and starts emitting light. Sometimes neon is used to startup the heating process in case of light sources based on metal vapors.

A historic overview and explanation of how such arc lamps work is presented here, through this link.

Deuterium lamp
A deuterium lamp is a gas discharge lamp and is often used as a UV source. It emits in general somewhere between the 160-450nm: Spectral distribution of a Deuterium lamp 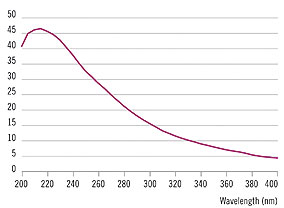 Xenon lamp
The xenon lamp is not often used in commercial UV/Vis-instruments.
In a Xenon lamp an arc is made through ionized xenon gas under high pressure. The high pressure gives the lamp high efficiency. It has a high intensity and the color is close to that of sunlight. More information through this link. 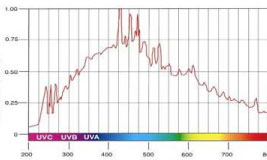 3. Light Emitting Diodes (LED)
A LED is a semi conductor which can emit light. LEDs can be used as a light source in the spectral region of 375-1000nm. Most LED are narrow banded (20-50 nm) but LEDs are cheap, have a long lifetimes and a small environmental impact.
Examples are:

More information about LEDs can be found here.

Additional informative and interesting material: A very nice website explaining how the different lamps work, their history and the components used in lamps can be found here.

In spectroscopy, the sample either: For both cases, in order to do an analysis we need to split the light into its different components. This is called dispersion. To split the light, we use a socalled wavelength selector.

Diffraction grating A diffraction grating consists of a series of small parallel groves. These groves cause interference, which makes the grating split the light into different wavelengths. In a spectrometer in general reflective gratings are used. 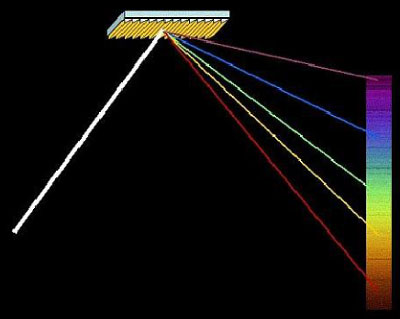 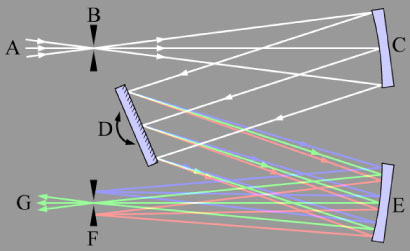 Prism
Different wavelengths have different refraction indices and therefore a prism can be used to disperse the light. A prism is a usually triangular shaped piece of glass or quarts that splits the light in its optical components. A prism disperses the white light 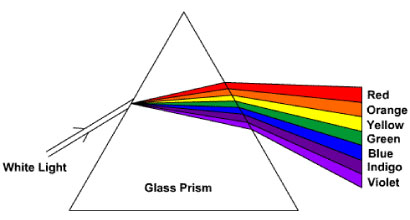 An experiment showing how a prism works in a spectrometer. The prism splits the light into its different colors:

More information about prisms through this link.

Gratings vs Prisms, a comparison.

Filters
Filters are colored pieces of glass and can be used to select a specific wavelength range. They are not often used in UV-Vis spectrometry because they are not very practical: if we want to record an full spectrum we would need to replace these filters for every color we measure. The figure below shows what such filters look like. Bandpassfilters for various wavelengths 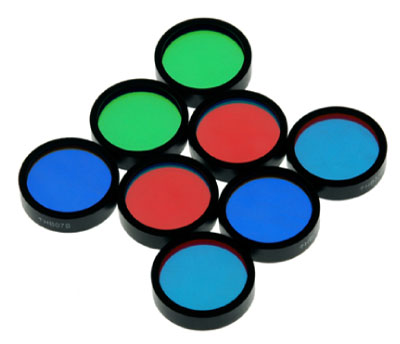 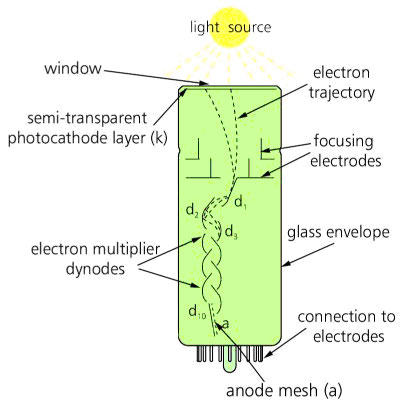 The most common type of detector in a UV-Vis spectrophotometer is a photomultiplier tube (PMT). It consists of a photocathode which releases an electron when a photon reaches the material (the photoelectric effect). The multiplication effect is created by placing a series of electrodes to amplify the signal. The first electron released from the photocathode by a photon is accelerated by an electric field of around the 1000 Volts. Due to the increased kinetic energy caused by the electric field the electron can release more electrons when it hits the first dynode. The process of acceleration and release of more electrons by the following dynode is repeated for several times, causing a cascade of electrons which causes an electric signal at the anode. The intensity of that electric signal is a measure for the intensity of the light at the detector.

A photodiode array (PDA) consists of a row of photodiodes (in general 256, 512, 1024, or 2048 elements) which can record a full spectrum at once. Also a PDA which releases an electron when a photon reaches the material (the photoelectric effect). Figure: Diode Array 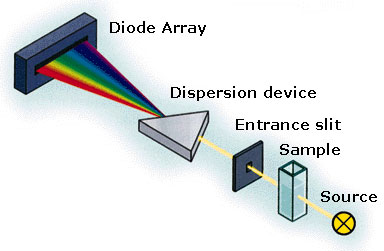 More details on photodiode and photomultiplier, this link.

A charge coupled device (CCD) consists of row an area of photodiodes which releases an electron when a photon reaches the material (the photoelectric effect). A digital camera also uses a CCD to convert light into a signal. A CCD can record a full spectrum at once. More info.