Abstract The µGCs further discussed as possible process µGCs are:


Description/explanation of the Varian CP 4900 µGC:

Varian Inc. is a company supplying analytical laboratory equipment. One of their products is the CP4900 µGC. It is the 4th generation of µGC products which was first developed in the 1970s. The µGCs consists of an injector, column and a detector installed in different small temperature controlled compartments. The unit uses precisely electronic pressure controlled carrier gas to run the injected sample gas of interest through the analytical column. The system can be configured of 1 – 4 channels. Each channel consist of a carrier pressure controller and a module which holds the injector, column and detector. Furthermore the instrument consists of a set of electronics and a computer in order to automatically control the different parts. 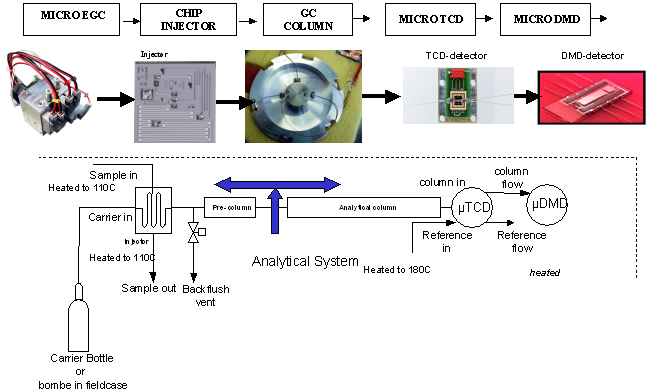 In the column, which is isothermally controlled, the injected sample gas is separated into its individual components based on their order of boiling point (non-polar columns), polarity (polar-columns), or molecular size (mol-sieves columns). The columns used are narrow (0.15mm) and medium bore columns (0.32mm). As displayed in the above diagram the analytical system also features a pre-column. This pre-column provides the functionality to pre-separate the sample. This is done to allow only the components of interest to flow into the analytical column, thus speeding up the system. But also to prevent the analytical column to be contaminated with the components of non interest. e.g. the protection of a mol-sieves column from the components CO2 and H2O. Those components would drastically decrease the separation of the other permanent gasses as N2, O2 and Ar. CO2 and H2O will fill up the pores of the material and will consequently decrease the separation power of the total column since the molecules of Ar, O2 and N2 cannot penetrate the pores anymore and will flow un-retained through the column without separation. Other µGC manufactures use different approaches to overcome this problem (e.g. by temperature programming). 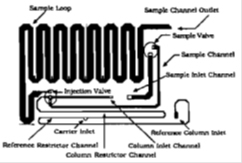 The carrier gas helium is often chosen. Helium is second best after H2 for high speed analysis (HETP lowest at high speeds) but has the advantage being nonflammable. It is a non-flammable inert gas which will transport the separated and measured components through the analytical column. At the outlet of the column the carrier gas, together with the separated components, will elute into a micro thermal conductivity detector (µTCD) detector . At this stage the components are measured, based on their difference in thermal conductivity with respect to the carrier gas (again He is second best after H2 in conductivity), and quantified measuring their area as it is digitized. The µTCD is a universal detector and will therefore measure all eluted components. The µTCD has a volume of 200nl and a limited quantity of detection of one to a few parts per million (ppm). The system can be equipped with a second detector in series with the µTCD to analyse the components to a relatively much lower limit of quantification (LOQ). However, this detector is a selective detector and is limited in determining all components. A combination of the two detectors may produce the required detection results. This detector will be used and further explained in the subchapter below.

Table 4: thermal conductivities of some components and carrier gas He

Two examples of the integration of the Varian µGC in a portable Zone 2 and Stationary Zone 1 cabinet for on-line installation is displayed below.

For the detection of low levels (ppbv) of impurities in a sample matrix Differential Mobility Spectroscopy (DMS) is a advantageous technique, due to the specific character of the technique. A Differential Mobility Detector (DMD) is a micro-detector that can be used in combination with µGC technology. Ion mobility spectroscopy is a similar technique to DMD but has the disadvantage that it only uses ~1% of the sample for measurement with the consequence of a worse detection limit (13). The DMD does not suffer from this limitation since it uses larger amounts of sample but it suffers from CO2 and H2O interference during the ionization process. µGC in combination with a DMD can account for that as it will first separate the impurities from the matrix before it enters the DMD.

Discussion of the µGC with Differential Mobility Detector (DMD) technique:

Ionization is the process of converting an atom or molecule into its component ions; each chemical species produces a unique ion. Both IMS and DMS rely upon ionization chemistry to detect the presence of a given chemical species. Ionization sensor source used on the DMS is a nickel (63Ni) or Americium (241Am) Once the sample is ionized, the objective of both the techniques is to separate and differentiate one ion species from another. After separation, the sensor detects and quantifies one species from another. Finally, the detection and quantification are presented as data. (13)

IMS Basics of Operation (13)
IMS identifies and detects chemicals based on Time-Of-Flight (TOF) principles. Essentially, IMS measures the time it takes a certain chemical ion to move through a uniform RF electric field. Samples are ionized and the ions are lined up using a shutter mechanism and then floated into a drift tube. Because it lines up the ions, IMS uses only a very small percentage (~1%) of the sample.

A homogenous electric field is applied over the drift tube and moves the ions down the drift tube. The homogenous electric field duty cycle can be set to more than hundreds of volts per centimeter, depending on the class of compounds targeted. Once set, the field does not change. The ions interact with neutral molecules within the drift tube, resulting in a TOF dependent on ion mass, size, and morphology. Once a target's TOF is established, the identification is based on that known TOF.

DMS Basis of Operation (13)
DMS identifies and detects chemicals based on the chemical species ion mobility in low and high electric fields. Samples are ionized and then flowed continuously via a carrier gas, such as air or nitrogen, into the detector area with its parallel plates spaced 0.5 mm apart. Once in the detector area, the ions experience a uniform oscillating asymmetric radio frequency electric field (Rf) which is typically 1 MHz and ranges from 500–1500 V. As applied, the Rf causes a perpendicular motion of the ions, the carrier gas causes the horizontal motion of the ions, resulting in a zigzag motion. Each ion species will exhibit discrete mobility characteristics. 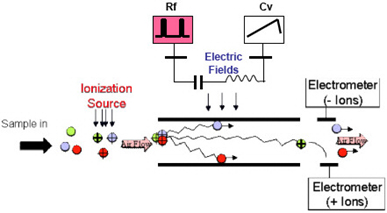 To make the DMS sensor tunable, a perpendicular DC tuning field, known as the compensation voltage (Cv or Vc), is applied. This field is superimposed on the oscillating asymmetrical Rf field and keeps the ions of interest centered between the parallel plates and is detectable simultaneously by both negative and positive electrometers. The electric field conditions required to permit a particular ion to pass though the filter to the detector are specific to each ion species. 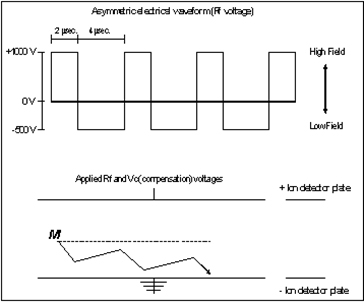 Although the average Rf field is zero, nonlinearity in the electrophoretic mobility causes drift.

The DMD can operated to measure positive and negative ions. As described in (14) a number of applications were developed in combination with the µGC .

The resident time for ions in the ion filter region is typically 1–2 ms with a transport gas flowrate of 300-500 ml/min. This rapid flow rate, coupled with the heating of the sensor (80°C–120°C), minimizes the risk of build-up of any material between the plates. The transport gas , called a drift gas, has to be free of CO2 and H2O. These components will negatively influence the ionization process.

SLS (Sensor Solutions in Silicon) is a German company. SLS was founded by scientists of the Technical University of Hamburg. Starting point was the interest from industrial enterprises to transfer the results of the latest university research into marketable solutions. Since the start approximately 10 years ago they developed a MEMS based micro-gas chromatograph.

The instrument consists of a µGC with the analytical and electronic parts integrated on one board:

The basic setup of the this GC consist of an electrically operated fixed volume injector, a micro capillary (MEMS) Column and a micro-Thermal Conductivity Detector (µTCD).

The injector is a sliding plate valve with an electromagnetic actuator. The sample can be injected into the column by multiple injections. By that the injection volume is controlled.

Figure 34: sample and inject on the SLS sliding plate valve

The MEMS thin film column consist of a 4 cm2 silicon plate with the column etched on it. It has a zigzag pattern to minimize flow effects in the column (15) (refocusing in the short column turns of the pattern) and increase lengths. The column is available in a number of materials, to cover the range of gas applications, capillary and packed. For capillary columns (56 – 100 cm length) the carrier gas consumption < 100 μl/min, for packed columns (27 – 65 cm length) the carrier gas consumption < 1000 μl/min and can be externally pressure controlled. 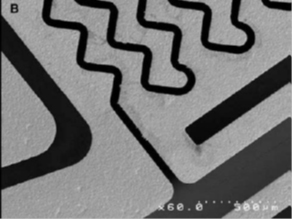 The µTCD consists of 4 filament constant temperature controlled, detector sensitivity is specified as 10ppmV for propane.

Two examples of the integration of the SLS µGC in a portable and Stationary XP-cabinet for on-line installation is displayed below.

The company C2V or "Concept to Volume" was founded as the result of a management buy-out of Alcatel Optronics Netherlands b.v. in 2002. The company supplies high added value products and OEM solutions based on Micro- and Nano Technology. One of the developments and products is the C2V-200 µGC.

The C2V-200 µGC consists of a system (124x84x60 mm) built roughly in two parts, one; the electronics and gas connections and second; the analytical cartridge with the injector, column and detector. The system can be combined from 1-4 channels integrated into 1 µGC. Modular and independently operable.

The heated MicroDELTA™ chip-injector consists of two silica 7x7 mm2 plates with a membrane in between and a etched sample loop with an Internal volume < 1 µl. The chip-injector is operated by pressure point switching. This is technique where a membrane functions as a valve by applying a (gas) pressure on it (usually the carrier gas). The column is a fused silica capillary column with an internal liquid film or micro-packing. Dimensions are generally <5m length and <250µm internal diameter and it uses 1-2 ml carrier gas which can be externally pressure controlled. A number of column materials are available to cover the range of gas applications.

Also the C2V-200 µGC is equipped with column temperature programming. This allows heavy components to be flushed out of the system before the next injection occurs by the fast incremental of column temperature.

An example of the integration of the C2 µGC and pressure sensors and controllers integrated on the industrial NESSITM platform is displayed below.

A brief overview of the general parameters of the 3 µGCs is displayed below.