If more requirements for a particular

application are made, this will lead to a compromise.

Column choice and optimization requires a systematic approach with respect to these criteria.

The choice of stationary phase

The separation of two components (the resolution) is the result of three conditions.

The function of the stationary phase in GC is to selectively and sufficiently retain sample components in a mixture in order to produce the required separation.

selectivity factor has the most critical effect of these three parameters, affecting resolution according to the resolution equation.

elution of the sample components than expected.

Despite many attempts to develop systems for stationary phase selection, the choice of the optimum phase is still largely

trial and error. Well-known attempts to categorise phases are the

McReynolds system and the Kovats retention index. In practice their applicability is limited. The

Kovats index provides little information about the respective polarities of the solute and stationary phase, but by comparing values measured on two stationary phases a direct quantitative measurement of the relative polarity can be obtained.

The figures below show the (strong) influence of stationary phase polarity on the selectivity for a specific test sample. As an example, the peak pair 8 and 9 is just baseline separated on the first column. On the second column, the resolution is much better, whereas on the third column the distance between the peaks 8 and 9 is very large. Which column is the best will also clearly depend on the other compounds present in the sample. 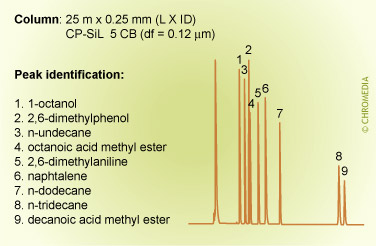 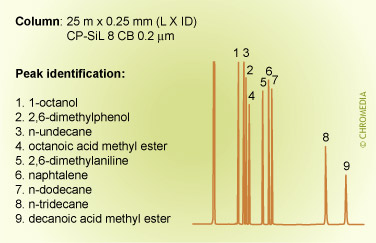 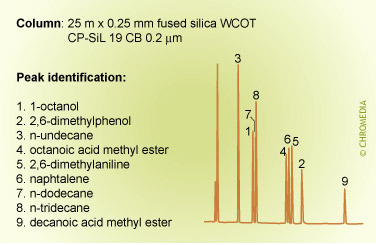 Phil’s Tips: When looking at these 3 chromatograms above, compare the results for relative retention by observing how peaks shift relative to each other for the different conditions. For example, check positions of peaks 8 and 9. Alkane 8 is much less retained on the more polar phase (CP Sil 19 CB), because it is less compatible with this phase. We can interpret this as being due to lower stationary phase solubility (distribution coefficient) which reduces solute concentration in the carrier phase and elutes it earlier.

In addition to the stationary phase characteristics and the nature of the sample components, the retention factor k is determined by 3 other parameters:

The first two parameters are combined in the expression for the phase ratio β in terms of column volume (gas phase) and stationary phase volume (film thickness).

The relation between the retention factor k and the phase ratio is described by:

where K describes the physical equilibrium of the component between the gas- and the stationary phase in the column. This factor K is the 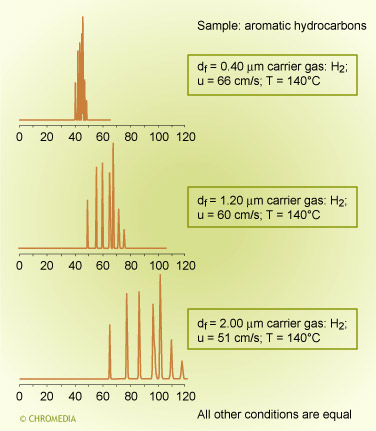 Chromatographic selectivity depends on the characteristics of both the stationary phase and of the solute molecules. Similar compounds, consisting of molecules of the same chemical type and having very similar boiling points, are difficult to separate on a non-polar phase unless very high efficiency columns are used.

elute in strict order of boiling point and the separation is much as one would predict from Raoults law.

A similar effect is shown on a different column containing the same phase for a separation of a mixture of solvents having different polarities. The alcohols now elute from the column relatively faster than any of the other compounds. The elution order is: methanol (BP 65°C) and ethanol (BP 78°C) before acetone (BP 56°C) and isopropanol (BP 82°C) before methylene chloride (BP 40°C). The other solvents also elute mostly according to their polarities. Methyl isobutyl ketone (BP 119°C) elutes well before toluene (BP 110°C).

The elution order now depends on both the relative vapour pressures and the differences in polarity. 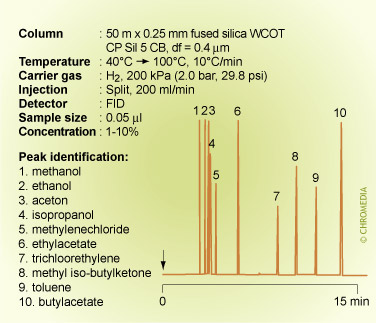 In practice it is very difficult to predict the elution order of compounds on neutral, non-polar columns, only based on boiling points, if these compounds are different in polarity and physical properties. 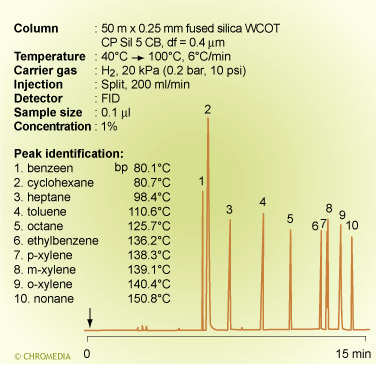 On polar stationary phases the retention order can only be found empirically.

The amount of stationary phase affects other separation parameters:

The amount of stationary phase has a twofold effect on the resolution:

If the k values are large enough (> 5), the relative effect on the resolution is small. The contribution of the k- value in the resolution equation is then near to 1. More stationary phase (thicker film) will then have very little effect. 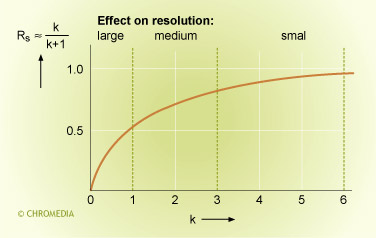 These two effects oppose each other:

The amount of stationary phase has a direct effect on the retention values. Retention can, in principle, also be increased by reducing the oven temperature.

The following method can be applied:

thin film column is, in view of the efficiency, always preferred to a thick film. Try to select the oven temperature with a thin film in such a way that the sample components get a suitable k-value. This is dependent on the volatility of each component. In practice these will be between 0 and 5 for a simple sample and between 0 and 20 for a complex sample. In case (and that is only valid for very volatile samples) that despite the very low oven temperature, the k-values are too small, choose a thicker film.

The following rule of thumb can be formulated for the choice of a thin-film or thick-film column: 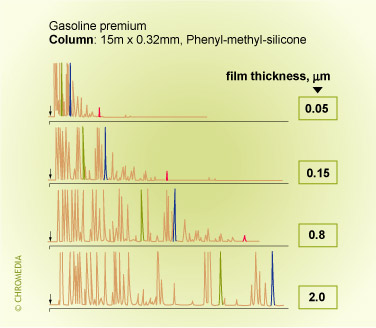 The resolution between any two sample components is proportional to the square root of the plate number and therefore, increasing the column length only has a weak effect, which means that:

The result of replacing a 25m x 50m column is an ill-advised attempt to achieve baseline resolution between the two compounds shown. The compounds would still not be resolved to baseline, the separation time would be doubled, and the peak heights would be smaller.

Resolution as function of column length 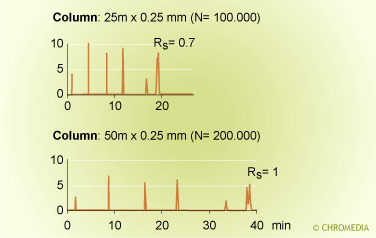 Efficiency of the column

The efficiency of a capillary column is determined by three column parameters: 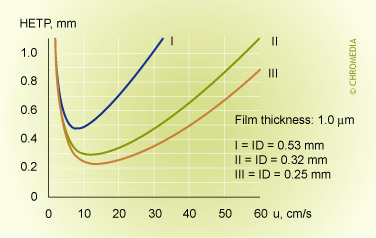 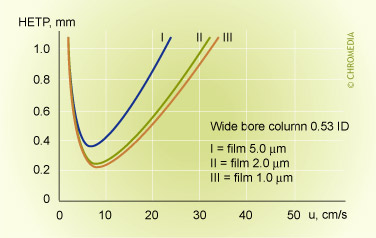 In addition to these three column parameters, there are a number of GC system parameters which can affect the efficiency and analysis time:

As the Dm is a function of the 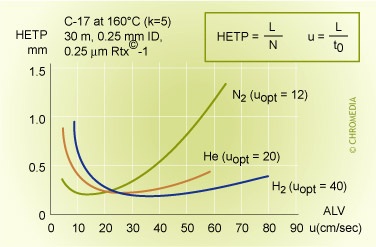 From the different H-u curves it is evident that 'heavy' carrier gases in the optimum generate slightly higher efficiencies. However, this optimum is obtained at a low gas velocity and the analysis time is longer. Increasing the gas velocity for nitrogen, in view of the slope of the curve, will result in a considerable loss of plates. Using helium and hydrogen will result in much less loss of plates if the analysis has to be carried out faster than the optimum gas velocity. Helium or hydrogen are generally a better choice. 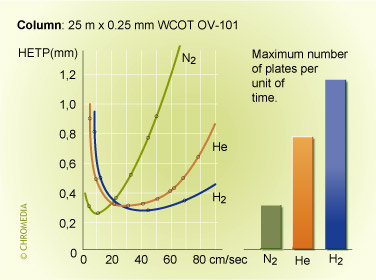 nitrogen can reduce the analysis time by a factor of 3. It is evident that the relatively high efficiency of hydrogen at high velocities is only valid if there are no disturbing factors, such as safety rules. 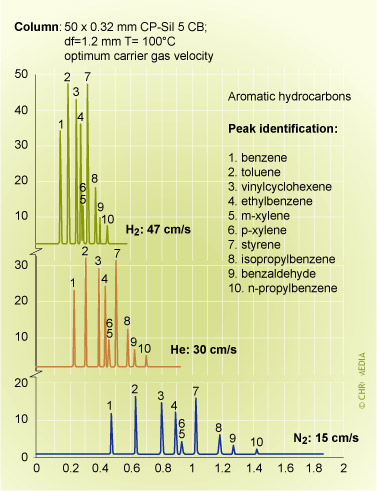 Note: The use of H2 here gives about the same separation performance, but in much less time, due to higher optimum carrier flow rate.

Temperature effects on retention and selectivity

The effect of temperature on the analyte partition coefficient is given by the van’t Hoff relationship:

Where Hs=molar heat of solution of solute;

Some experimental plots for a number of compounds on three phases of different polarities are shown below. 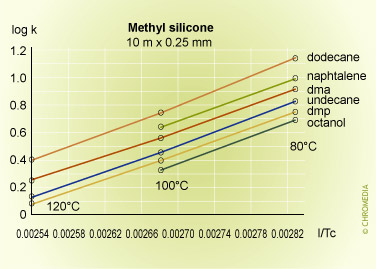 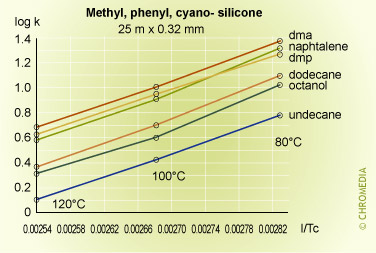 The plots are linear over the range of temperatures employed, and lie approximately parallel to each other indicating that there is little change in selectivity with temperature for many compounds particularly if they are chemically similar to each other. In fact selectivity usually increases very slowly with decreasing temperature but to take advantage of this a considerable sacrifice would have to be made in analysis time, as shown in the theoretical plot of resolution versus column temperature shown for a boiling point difference of 1 degree. An exception to this rule was for the naphthalene van 't Hoff plot, which gave a smaller slope than the other components, and consequently intersected that for dimethylphenol. This means that the peaks for these two compounds will reverse their elution order at about 85oC on a stationary phase containing cyano-groups (CP-Sil 19 CB).

This kind of behavior is often experienced when compounds of different chemical types are separated on moderate to high polarity stationary phases, and cannot be predicted from runs at a single temperature. Difficult separations should always include a systematic study at various temperatures to determine optimum conditions for the proposed method.

As the temperature increases from 60°C, the resolution falls rapidly due to the effect of temperature on the selectivity factor, and at about 85°C the two components co-elute. Resolution then increases rapidly after the reversal in the elution order, reaching a maximum at about 160°C. After this the resolution starts to decline because of the reducing retention factor and its effect on the k/(1+k) function.

The speed of capillary columns

An important feature of capillary GC columns is the speed, in other words, fast analysis. Analysis time is much shorter than with packed columns, combined with a better separation and peak shape.

Capillary columns are relatively long, but this does not necessarily result in long analysis times.

The optimum gas velocity can be calculated from the Golay equation:

optimum gas velocity, and therefore the speed of analysis, is inversely proportional to the column diameter! Fast analysis can be achieved by using short columns with small internal diameters. This combination is often known as fast GC or high speed GC.