Abstract Ion-suppression is a reversed phase technique suitable for ionisable compounds, in particular weak acids or weak bases. Ion Suppression Chromatography (IS) works for polar, weak acidic or basic compounds, using a standard RPLC column. Also neutral analytes can be separated and quantified. Separation of (strong and weak) acidic or basic compounds is possible with standard reversed phase columns and a modifier/water mobile phase, where the water contains a buffer to adjust the pH of the eluent. This technique has the advantage of simultaneously separating ionizable and non-ionizable compounds.
This chapter provides practice oriented basic guidance.

Weak acids with a pKa of 3-6 are strongly dissociated in a neutral aqueous solution.

Suppression
For weak acids or bases in particular when neutral polar or medium polar compounds must also be analyzed, Reversed Phase LC offers a solution in the form of ion-suppression (IS) chromatography.

At a pH 1.5 to 2 units lower than the pKa, the weak acid is almost completely protonated and thus, neutral. The ionisation of the compound is then “suppressed”.

Many compounds are ionic or polar so the use of regular RPLC is not straightforward and adjustments have to be made to analyze these compounds. Ionic Suppression is based on the pH adjustment of the mobile phase to result in an non ionized analyte.

For this type of separation standard RPLC columns are used with water + modifier(s) as mobile phase. The aqueous component is actually a buffer with a precisely controlled pH. Silica based RPLC separation conditions are constrained by the stability of the column packing:

ISC allows the separation of both neutral and ionic compounds in a single run. All reversed phase separation principles apply to this technique. So, in brief:

Retentions of compounds as function of the pH depend on the pKa values and the acid-base behaviour of the sample components.

Retention of components in IS chromatography with reversed phase columns can be controlled in two ways:

Effect of pH on ionisation

The simulation shows how pH affects ionisation. If the pH of an aqueous solution is equal to the pKa value of the compound (pKa = 4 in this simulation), the compound is 50% dissociated. At two pH units below the pKa, the dissociation is reduced (suppressed) to <10 % for weak acids. At two units above the pKa, the dissociation is approaching 99%. The pH and ionisation have a strong effect on the retention factor k.

With regard to the eluent, one should pay attention to a number of aspects. The stability of the pH is important. Therefore a buffered system is normally used. In the event that a modifier is needed, an alcohol (preferably methanol or 2-propanol)is best and should be kept to below 15% by volume.  Other modifiers can cause solubility problems for the aqueous buffer. Ammonium salts are preferred as buffer salts for the same reason.

Effect of pH on retention

The retention is strongly influenced by the pH of the mobile phase. It is possible that two peaks appears in the chromatogram: one peak from the undissociated acid and one from its conjugate base. Such a peak shape indicates poor pH stability in the column.  Poor pH stability indicates that the buffer capacity is not sufficient to maintain pH upon sample injection.

You can see the influence of the pH on k (at constant modifier content) in this simulation below.

The extent of dissociation, which depends on the pH (relative to the pKa), has a major influence on ISC retention.  When the k is plotted against the pH of the aqueous buffer, the diagram looks like a titration curve: two plateaus with a steep transition point (see the above diagram). At a pH 2 units below the pKa value, as well as a pH of 2 units above the pKa value, plateaus are formed. In the first case, the acid is completely protonated and is thus uncharged and neutral. This uncharged compound (KHX) physically distributes between the stationary phase and the mobile phase takes place according to the reversed phase mechanism. If the pH is two units above the pKa, the acid is completely dissociated. Inorganic weak acids and small organic acids are strongly ionic and thus no retention (k = 0) occurs. Organic weak acids with sizeable non polar groups (CH2- or phenyl groups) will experience some retention in spite of ionization due to their large hydrophobic component (i.e. k > 0).

When sample ions are injected along with similarly charged buffer counter ions, an ion-exchange equilibrium occurs which gives retention of the sample ions. 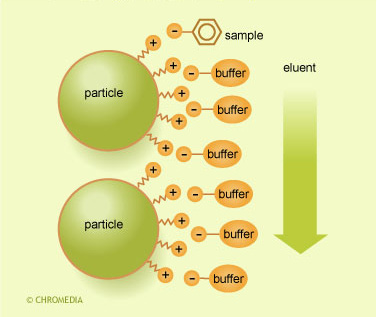 This exchange is a dynamic equilibrium and is affected by the type of counter-ion and the concentration (molarity) of the buffer in the mobile phase. By analogy with adsorption chromatography, there is a competition between the sample-ions and the counter-ions to bind themselves to the ion-exchanger.

Independent of the capacity of the ion exchanger, a higher concentration of buffer ions will result in a stronger coverage of the ionic functional groups of the stationary phase. This will reduce the retention of all the sample compounds. 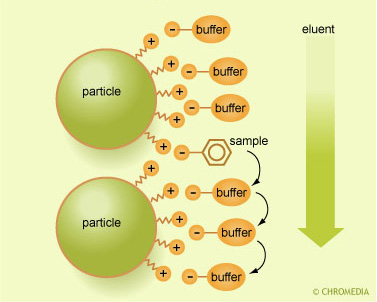 Residual silanols on the silica material have different pKa values depending on the pH of the mobile phase.  At a pH > 6 they will be largely negatively charged due to complete dissociation. The same applies to the acidic sample components. Since both the residual silanols and the acid have the same (negative) charge, hardly interaction exists. At a pH < 3 most silanol groups are not dissociated. Undissociated polar acids will show strong interaction with the free silanol groups, resulting in considerable asymmetrical peaks. This effect depends on the type of silica (commercial source). High coverage RP-materials seem to be more advantageous than low coverage phases. Increasing the salt concentration of the mobile phase will reduce the peak asymmetry.

The retention as function of the pH strongly depends on the molecular structure and physical properties of the compounds. This means, that each components will behave different when the pH is modified. pH effect on selectivity 1 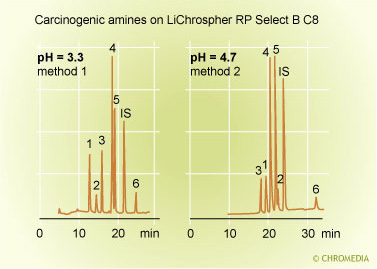 It allows a strong influence of the pH on the selectivity of the separation’. In the application the retention of most of the amines has increased at a higher level of the pH value of the mobile phase. The effect of the ph is quite strong on retention and separation. In practice it is important to control and stabilize the pH of the eluent within 0.1 pH unit. 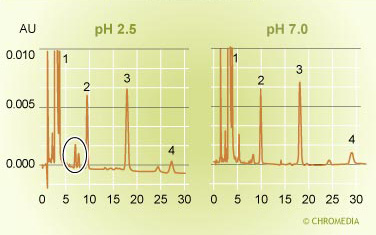 From the analysis of a major product, in which 4 impurities can be observed, can be concluded that all these components have a more or less neutral character. The retentions change hardly at a change of the pH of 2.5 to 7.0. On the other hand in the upper chromatogram, 2 small peaks have been marked there, which are at pH = 7.0 not visible and elute somewhere in the front of the chromatogram (low k value).  One can therefore conclude that in this case we deal with 2 weakly acid compounds, which only get sufficient retention at low pH to be detected. This is the result of the ion suppression at low pH. 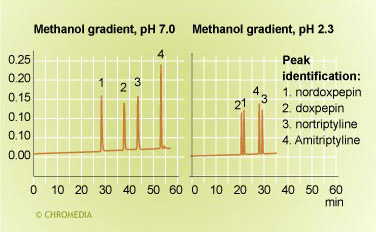 For basic compounds the retention behaviour is reversed. During a gradient at pH 7.0 the retentions are relatively long. At low pH of 2.3 retention are much lower, but certainly not unretained. Also significant changes in the selectivity are observed as result of the change in pH. Further reduction of the retentions can be obtained by increasing the percentage methanol of the gradient. 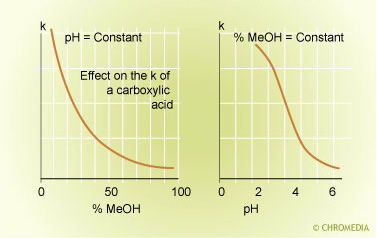 At constant pH the ISC system behaves as a "standard" reversed phase system. More modifier means less retention for all the peaks in the chromatogram.

At constant modifier percentage only the weak acids and bases will shift in retention as function of the pH of the mobile phase. The retention of neutral compounds will not change with the pH.

Examples of pH effect on retention

For (weak) organic acids, the dissociation will increase at higher pH as the retention decreases. A plot of the retention factor k as function of the pH appears as a reversed titration curve. 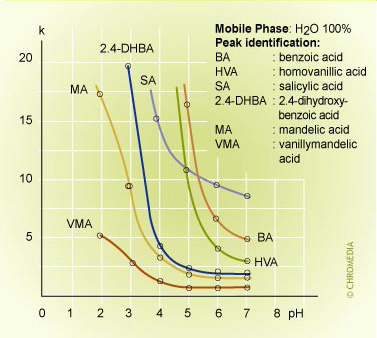 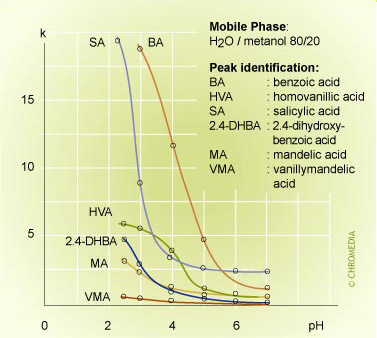 The plot of the retention factor as function of the pH of the mobile phase is for weak acids the reversed of a titration curve. This effect is in general the same for all ionic compounds, but differs with the properties of the individual components. Adding modifier to the mobile phase results in a reduction of the retention factor of all components in the sample, following the general rules for retention in RPLC. The selectivity of the chromatographic system can be changed by the type of modifier(s), but now also by changing the pH of the eluent.

Retention depends on the type of compound and the extent of dissociation. The retention is not easily predictable. The following parameters influence a compound's retention in ISC:

Under normal conditions the weak acid will be more or less dissociated. The extent can be expressed by the dissociation value λ = X-/(X- + HX).
If pH = pKa,  λ will be equal to 0.50. The retention factor of a compound can be described quantitatively as the product of the chromatographic distribution constant and the phase ratio (k = KR * Vs / Vm).

Effect of pH
The retention formula shows in more detail how in Ion Suppression the retention is dependent on the pH of the mobile phase relative to the pKa of the weak acid, the extent of dissociation, the hydrophobicity of the undissociated acid and the polarity (solubility) of the dissociated acid:

The pH has a substantial influence on the k close to the pKa, but this depends on the absolute difference between K HX and K X-. For most compounds, (compounds with a large non-polar carbon chain) K X- <<K HX and the bracketed term in the numerator reduces to 1. In that case the formula is simplified into:

which can be further simplified when the H+ concentration is considerable greater than Ka (the pH is 1.5 to 2 units smaller than the pKa):

In that case retention takes place according to the “normal” reversed phase mechanism. Keep in mind that we are still working on a standard RP column!