Analysis of biogenic amines in wine

Abstract Although high performance liquid chromatography (HPLC) is the major technique used for the determination of BAs in wines, gas chromatography (GC) and capillary electrophoresis (CE) have also been employed in the separation and detection of these compounds in wine. The aim of this chapter is to show/overview the different analytical methods available for their analysis.

Regarding their detection, BAs generally show little, if any, ultraviolet (UV) or visible light absorption, fluorescence or electrochemical activity and thus, other methods are required to achieve an appropriate sensitivity in the detection like a derivatization with an appropriate agent or the use of

When derivatization is developed, it should be ensured that:

The following table summarizes some of the derivatizing agents most frequently used in these cases (Click for full page view of table). 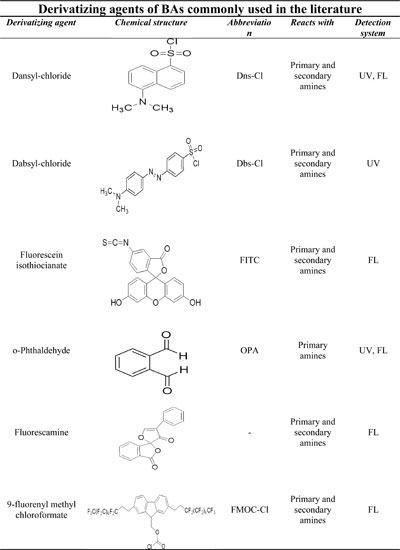 One of the most used derivatizating agents is DnsCl which reacts with either primary and secondary amino groups, and even tertiary amines in extreme reaction conditions, providing very stable derivatives and combining the unique feature of being both fluorescence and detectable in the UV region. The following figure shows the mechanism of the derivatization reaction:

Derivatization reaction of BAs with dansyl-chloride

Some sample pretreatment methods in which no derivatization steps or sample cleaning procedures have been proposed in the literature (only dilution and filtration is enough). In this cases either CE as separation technique or MS detection have been used. However, other authors propose different alternatives, especially for the preconcentration or cleaning of the samples.

During sample pretreatment and chromatographic/electrophoretic separation also an appropriate internal standard must be chosen, capable of behaviour similar to those of the analytes throughout the whole analytical procedure. In the determination of BAs in wines heptylamine, 1,7-diaminoheptano or cycloheptylamine have been used as internal standards since they are not present in wines.

HPLC technology has been the most popular analytical approach to assay BAs either individually or in combination for the analysis of wines (by reversed-phase-liquid-chromatography, RPLC), also for other sample matrices. A number of different detection systems have been used for this purpose:

Most stationary phases are based on silica that has been chemically modified with octadecyl (C18) chains. When conventional C18 columns are used (100-250 cm length, 3.0-4.6 mm i.d), triethylamine (TEA) is frequently used (percentages around 0.25% w/v) as additive of the mobile phase (pH values around 5), in order to avoid the adsorption of these basic compounds onto the stationary phase (caused mainly by the remaining silanol groups) and thus preserve the analytical column lifetime.

Use of nano-liquid chromatography for the determination of BAs
New miniaturized separation methods offer the possibility to achieve good resolutions and high efficiency in a short analysis time making use of minute volumes of both samples and reagents. This is the case of nano-Liquid Chromatography (nano-LC). In nano-LC capillaries, containing selected stationary phases, i.d. in the range of 10-100 μm and flow rates in the order of nL are currently used. Because the low flow rate hyphenation with specific and very sensitive detectors such as mass spectrometry (MS) can be easily done. Up to now, for BAs nano-LC has only been used in two cases: one of them using UV detection [7] while the other one used MS detection [12].

The following figure shows the nano-LC-UV chromatogram of a group of 10 BAs (ethanolamine, methylamine, tryptamine, 2-phenylethylamine, putrescine, cadaverine, histamine, tyramine, spermidine and spermine). The chromatographic separation of the above reported amines was carried out in a capillary column (100 μm i.d.) packed with bidentate C18 particles. Dns-Cl was also used as derivatizing agent.

Nano-LC chromatogram of a mixture of ten BAs

Schematic illustration of the nano-LC system used in [7]. 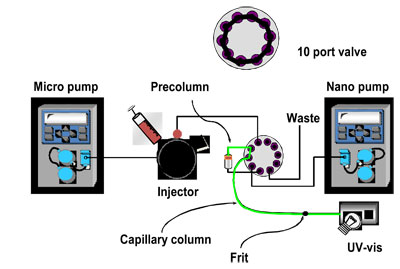 GC has also been used for the analysis of volatile amines and their derivatives (i.e. putrescine, cadaverine, histamine, tyramine, spermidine etc…) in wine but not as often as HPLC. The detection systems that have been used for this purpose are basically:

Although historically amines present difficulties in GC analysis, it is possible to detect them if they are previously

derivatized. A number of methods can be employed to derivatize amines such as:

CE is also an attractive alternative for BAs determination because of its inherent advantages:

However, the LODs achieved are higher when compared to HPLC or GC, due to the lower amounts of sample injected and to the short optical path length. That drawback can be avoided employing a suitable preconcentration method or using a highly sensitive detection systems.

Because BAs are weak bases, pH values close to 4 are appropriate to protonate the compounds and thus their separation by capillary zone electrophoresis (CZE) is feasible. In this case separation occurs as solutes migrate at different velocities through the capillary due to the difference in their charge to mass ratio. Suitable buffers may contain either phosphate (pKa1 2.1, pKa2 7.2, pKa3 12.3), formate (pKa 3.8), acetate (pKa 4.8), citrate (pKa1 3.1, pKa2 4.7) etc. However, when derivatized amines are analyzed, the whole structure of the derivatized compound should be taken into account since a variation of the pKa value or even a change in the charge may occur. In general, CZE parameters that should be optimized are: the ionic strength of the BGE, its pH value, the presence of organic modifiers like ethanol, methanol, propanol, etc., as well as the separation voltage, temperature, injection time and type (electrokinetic or hydrodynamic) and the washing protocol at the beginning and at the end of the day and between injections.

Up to now, only few works have shown the determination of BAs in wines by CE (the number is much lower than the ones dealing with HPLC). Basically CZE [8, 15, 16] and micellar electrokinetic chromatography (MEKC) [17, 18] modes have been proposed.

The detection systems that have been used for this purpose are basically: 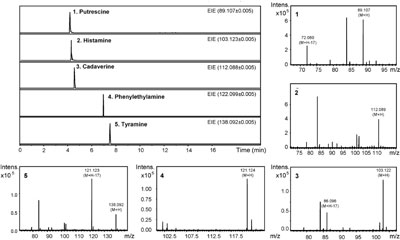 Some examples of methods

Some examples of different methods. Click figure to enlarge. 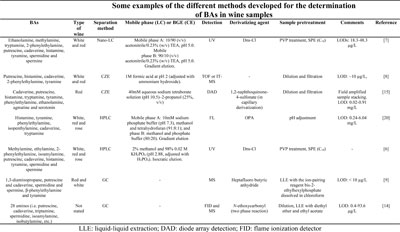 [6] Soufleros, E.H.; Bouloumpasi, E.; Zotou, A.; Loukou, Z.; “Determination of biogenic amines in Greek wines by HPLC and ultraviolet detection after dansylation and examination of factors affecting their presence and concentration”. Food Chemistry, 2007, 101, 704-716.

[11] Loukou, Z.; Zotou, A.; “Determination of biogenic amines as dansyl derivatives in alcoholic beverages by high-performance liquid chromatography with fluorimetric detection and characterization of the dansylated amines by liquid chromatography–atmospheric pressure chemical ionization mass spectrometry”. Journal of Chromatography A, 2003, 996, 103-113.